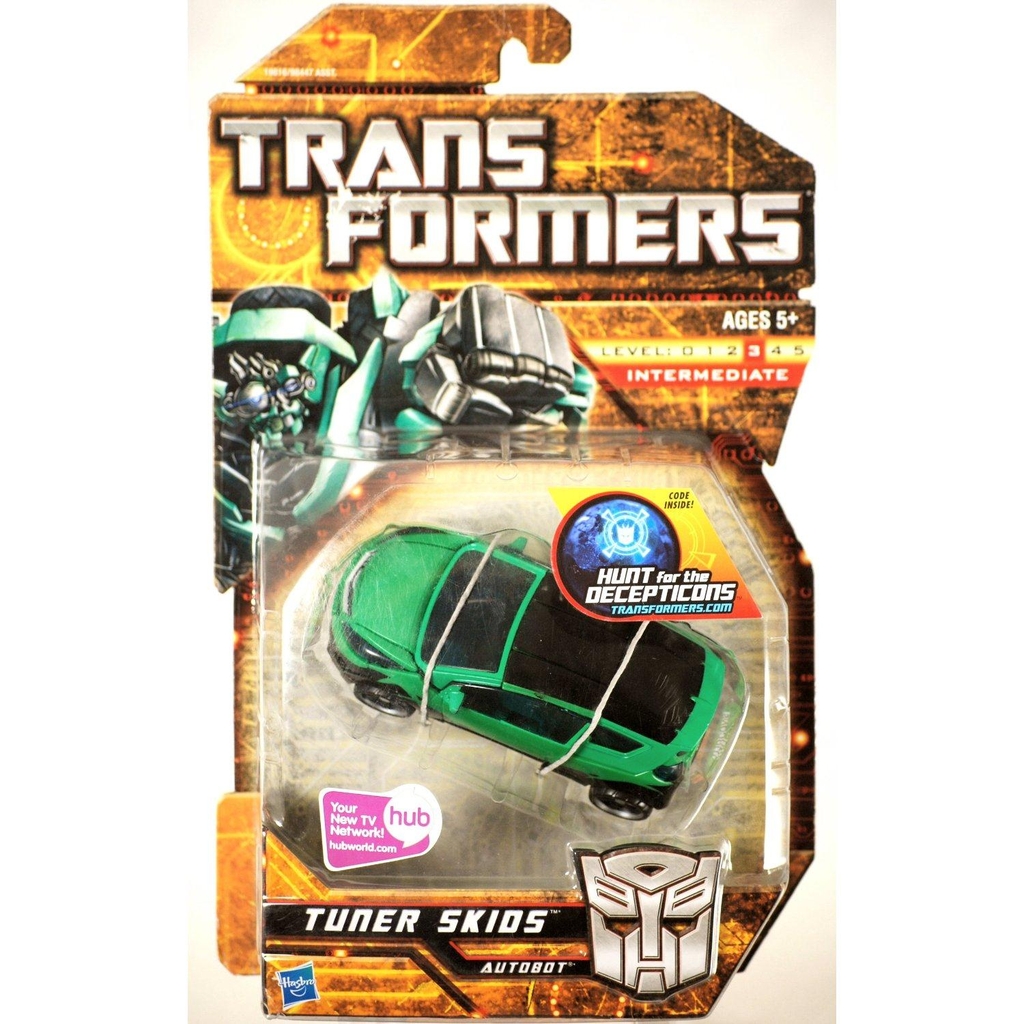 This poor little guy doesn't have a feedback thread yet. So here we go! You've seen this mold before, but love him or hate him... this redeco is packed with a mean right-hook and a sense of humor!

There is no arguing that Skid's Chevrolet Beat concept alt-mode is sleek and compact. Just like the original deco, however, his shins are visible just under the front end, but completely ignorable. He rolls freely on most surfaces, but the sharp edges of the exposed robot kibble can get caught in carpet fibers.

At first glance, Tuner Skids seems to have the exact same colors as the original. He's actually a slightly more vibrant and consistant shade of green and the black paint apps are kind of glossy. I noticed some paint application errors were common with the back windows, but since they are black they can be easily corrected with a black permanent marker. He only has two painted windows, but because the translucent plastic they used for the others is so dark the painted windows blend in perfectly. One additional minor problem is the Chevrolet logo on his rear end does not have a paint app, but a gold marker can fix that.

The biggest difference between Tuner Skids and his original deco are the new apps applied to his alt-mode's rear end. His license plate now read "1H8CONS" instead of "SKIDS," he has the Autobot symbol that was previously located on his crotch, and of course... a humorous jab at the Fallen.

Transformation can be very frustrating. Just like Mudflap, Skids is incredibly reliant on panels. Unlike his legs, Skids' arms fold away nicely in alt-mode. The biggest problem with both versions of Skids are the panels. At times it can feel like forcing a panel to do something displayed in the instructions will break the figure. Getting him into robot mode is a case of getting all of the panels to fold away neatly into a backpack, which clips and pegs neatly into his torso. In robot mode, Skids inherits the same gold plastic robot limbs that livened up Mudflap's appearance. However, unlike Mudflap, Skids retains some silver plastic, which is very welcome. He has just enough gold to attain that Tuner appearance, but the silver helps tone it down so that it does not overwhelm him.

The silver plastic dominates the arms. Both hands and upper arms are silver, while both shoulders are gold. Gold plastic dominates Skids' legs. His thighs and shins are gold, while his knees and feet are silver. Although, the silver plastic used in his knees is a lighter tone. I think it's actually more akin to the generic gray plastic found in the original deco.

The gold plastic is passable, but if you take a closer look it's actually a slightly glittery orange plastic. The silver plastic, with the exception of his knees, is astounding. It looks metallic and is a stark contrast to the generic gray plastic that I think was overused in the ROTF line. This plastic looks like metal and that is especially evident with his giant fist.

His headsculpt actually has superior and more movie accurate paint apps. Although, if you are a stickler for details... you'll have to paint one of his teeth gold as they are both silver. Posability is the same as the original. He has the same car kibble on his shoulders and shins, but they're not so intrusive as to make creating fun poses impossible. He also retains the same gimmick with his giant punch action fist. Press the switch on his elbow and his giant fist will extend out and a blaster will pop out of his forearm.

Pros:
This redeco has a sense of humor.
If you didn't like Skids before, the humor may change your mind.
Tuner appearance was toned down.
Improved headsculpt paint apps.
Silver plastic looks like metal.
Sleek and compact alt-mode.
Pairs nicely with his brother, Tuner Mudflap.
Looks better than the original deco.
Very fun robot mode.

Cons:
The silver plastic is not consistently utilized.
The gold plastic is actually orange.
Minor paint app errors.
Robot kibble visible in alt-mode.
Transformation can be an absolute chore.
Some transformation steps make you feel like you're going to snap the figure in half.
Color choices aren't vastly different from the original deco.

It's amazing how a small thing like a funny bumper sticker feels like an extra mile of attention was put into making Tuner Skids feel like less of an afterthought, as was the case with Tuner Mudflap. He retains all of the problems this mold has, but if you can get passed that the end result is a funny little guy with a hell of a punch.