I’ll start from the top down.  Arcee’s head sculpt is very accurate to the cartoon with a good amount of detail, as well as being on ball joint.  Nothing special here, but nonetheless, very nicely done.  On the torso, you find just what you would expect.  There is a good amount of detail in the chest and waist, and it also provides Arcee with a very high amount of cartoon accuracy.  On the back of Arcee, the seat in alt mode goes down pretty far and almost looks like the stinger or abdomen of a wasp.  Nothing huge, but if you’re dying for show accuracy when you’re taking your risque shots of Arcee from behind, you’re going to be let down, perv.

Now onto Arcee’s biggest downfall.  As you all are likely aware, Transformers Prime Arcee has some little “wings” as we’ll call them, in the show located on her upper back.  I don’t have a problem with these personally, but apparently the engineers that worked on this figure at Hasbro had a back-kibble fetish flare up.  The kibble on Arcee’s back is ridiculous and easily sticks out a good inch and a half.  If you’re viewing her from directly on in the front, your depth perception can kind of help you out in keeping the kibble to a minimum, but if you’re looking at her from anything more than a 20 degree angle, you’ll be hearing Schwarzenegger’s voice in the back of your head shouting “It’s not a tumah!” for the rest of the night.

Arcee’s legs are probably the highlight of the robot mode.  The detail is all there down to the feet, and the articulation allows for a great amount of poses.  The aesthetics look very show accurate and sharp, and I love how the feet give off a little bit of a stiletto vibe, something that compliments Arcee very well.

Arcee’s alt mode is bittersweet to me.  Don’t get me wrong, it looks surprisingly good despite looking about as small as a scout class, but I just can’t seem to get into displaying Transformers that are motorcycles in bot mode.  I didn’t do it with RtS Wreckgar, and I won’t do it with PRiD Arcee.  If you’re someone who doesn’t have a problem with this like I do, then you’ll be very pleased with Arcee’s alt mode.  Having said that, if a 3rd party company like Dr. Wu does a little articulated Jack to ride on Arcee, I may change my mind.

Having said all that, Arcee’s alt mode is what it is.  A solid motorcycle mode with few problems.  My only real gripe is that the front handle bars cannot turn, but the wheel fixture can.  Not a huge deal for a deluxe class Transformer, but if you’re planning on displaying in alt mode with the front wheel rotated a little bit, you may be disappointed.  A huge positive for this mode is just how realistic it does look as a motorcycle; you can’t see any remnants of a robot anywhere, and the detail is spot on.

Overall I highly enjoyed PRiD Arcee.  I was able to find her at retail fairly early, so I didn’t get stuck paying the $20+ premium some places.  My final verdict is that this version of Arcee is very solid for the price point.  Despite having the kibble problem in robot mode, she finishes strong and compliments that with a very impressive alt mode.  I wouldn’t recommend paying more than retail if you haven’t pick her up yet, but it’s a definite buy if you see her at retail. 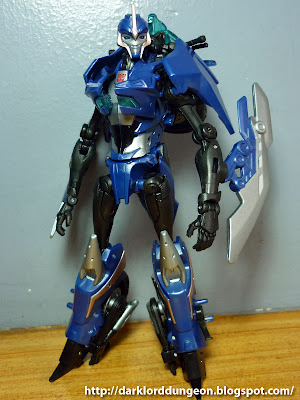 Presenting Arcee from the Transformers Prime animated series. Arcee is a Cybertronian Scout - when is she never a scout? One of Optimus Prime's best actually.

Except this particular Arcee is suffering from a severe case of Survivor's Guilt. Before the Autobots in the Transformers Prime universe abandoned Cybetron in what would be later called the Great Exodus, Arcee was paired with an Autobot named Tailgate.

During a mission, Arcee was captured and tortured for information by the Decepticon Airachnid. When Arcee refused to reveal any information, Airachnid brought our Tailgate - who was apparently also captured. Tailgate was tortured will Arcee admitted that she did not have any valuable information. Satisfied, Airachnid killed Tailgate. Arcee was rescued before Airachnid could do her in as well.

After the Exodus, Arcee was again paired with another Autobot, Cliffjumper. He not only looks like Tailgate, he gets killed too - well later he gets re-animated as a psychotic Zombie, cut in half by Megatron and scattered in a mine. Anyway, this drives Arcee - understandably over the deep-end and Arcee ends up hating having to be paired with anyone. Ironically, she's assigned by Optimus Prime to protect the human Jack Darby. You can imagine her joy at having to protect someone from the Decepticons.

Transformers Prime Arcee's blister card does not mention much about her. Doesn't mention anything at all. However, her wiki reads "A former scout on Cybertron before the Great Exodus, Arcee is the least physically-imposing of Optimus Prime's crew, but she's also Optimus's most reliable solider, his go-to-gal when he needs somone he can count on. Whatever she lacks in physical form she more than makes up for it in force of personality. She is tough as nails at all times, always ready with a snarky quip even in the face of deactivation, not afraid to bend the rules every now and then, and seemingly never, ever scared." Click here for the rest of the wiki.

She's got boobs! If you're into anthropomorphic robot warriors who are slightly mentally unhinged and sharp of tongue - probably both literally and figuratively - then Transformers Prime Arcee is for you!. Let's admit that previous incarnations of Arcee to appear in this blog: TRNS-01 Valkyrie, and Transformers DOTM Arcee, both have their feminine wiles, nothing come quite close to proud the feminine form of Transformers Prime Arcee.

Now that we've gotten that obvious particular proclivity out of the way, let's talk about what else makes Transformers Prime Arcee such a nice figure to collect. 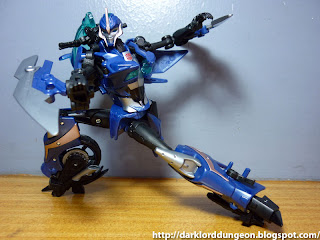 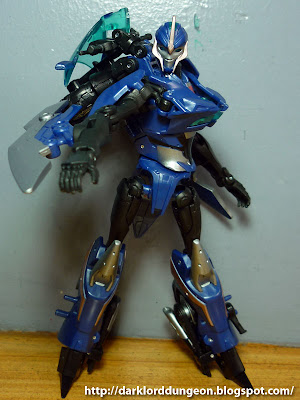 And as you can see from above Transformers Prime Arcee's flexibility is incredible! 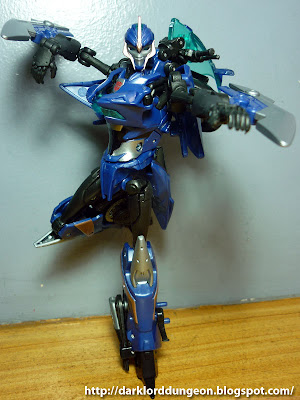 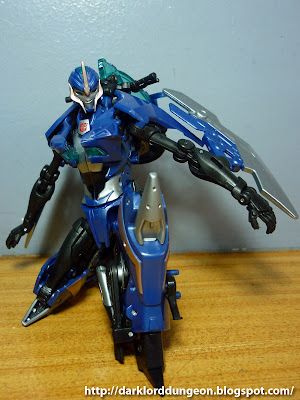 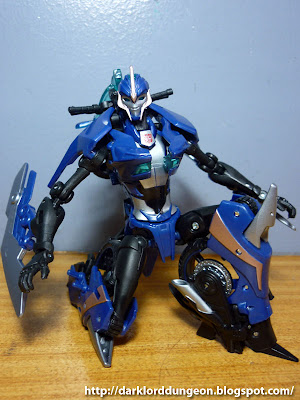 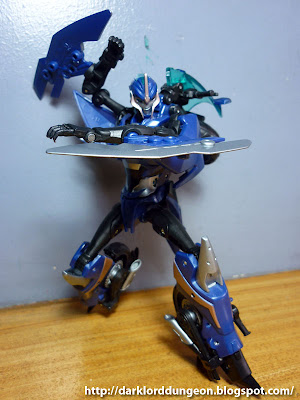 You also have to love Transformers Prime Arcee's bike mode. While it may be argued that she lacks detail in her bike mode, certain portions are finely sculpted - particularly the handlebar area: 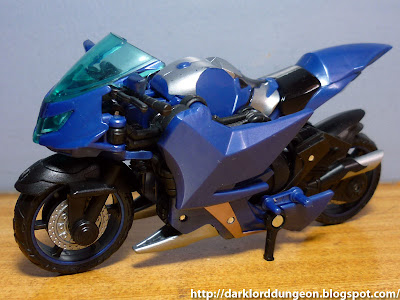 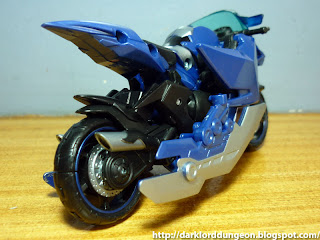 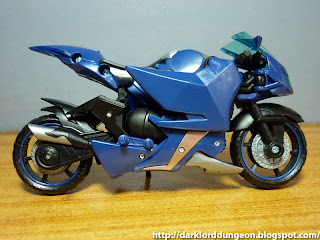 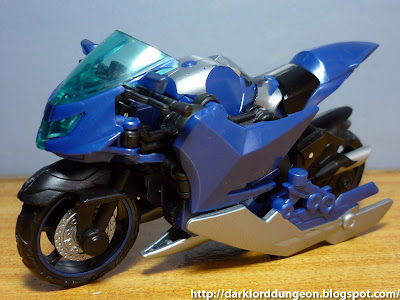 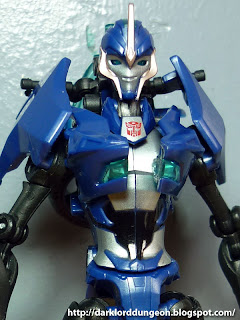 I have three issues with Transformers Prime Arcee. The first of which is.... she's blue. Arcee has traditionally always been pink and white. What we have here is... Chromia I suppose. I'm not sure why the animators of the cartoon felt the need to change her color - probably so it's less girly (Though it flies against tradition). Let's note thought that there is a pink version of Transformers Prime Arcee. She comes in a two pack along with a "taxi" version of Bumblebee. They were released as an SDCC2011 exclusive. This Transformers Prime exclusive sells for around US$72  (Around PhP 3,000 plus shipping) on ebay.

Second is her shoulder pauldrons/wings. They tend to get in the way of everything that involves her arms and, without much cajoling, you will have some difficulty getting to raise Arcee's arms above her head - though it can be done. 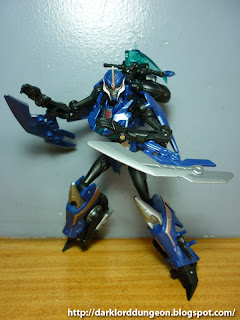 Last is Transformer Prime Arcee's balance/feet. Her feet are pretty pointed and, while they can be moved a little bit up-and-down, there is not much in left/right support. As a result, if you review most of the images in this review, you'll note that Arcee is leaning against the wall. She'd probably look best on a shelf if you provide her a stand for pose-ability.
All in all, a solid, flexible Transformer that doesn't come by every day. A definite must have for a Transformers Prime collector. I purchased Arcee at retail price here in the Philippines - Toy's R'Us for PhP 699.75 (Around US$ 16). For some strange reason Transformers Prime Arcee is available on Amazon for nearly US$ 70 (PhP 3,000 plus shipping). I guess she's rare abroad or the market hasn't saturated yet.  She's quite common here in the Philippines.
Các nội dung Hướng dẫn mua hàng viết ở đây
Nội dung đánh giá chi tiết viết ở đây