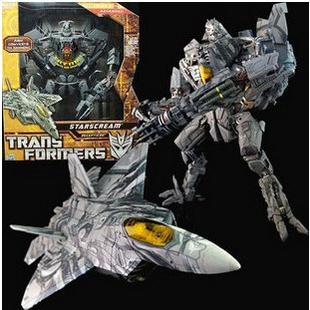 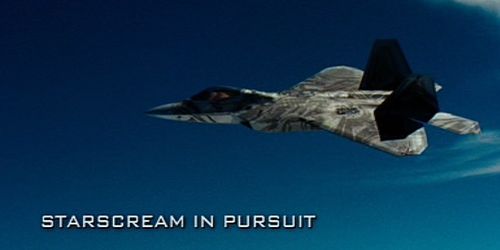 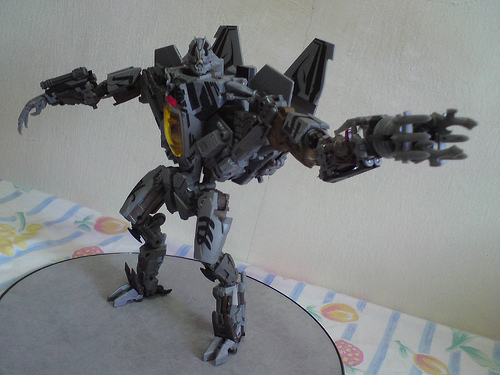 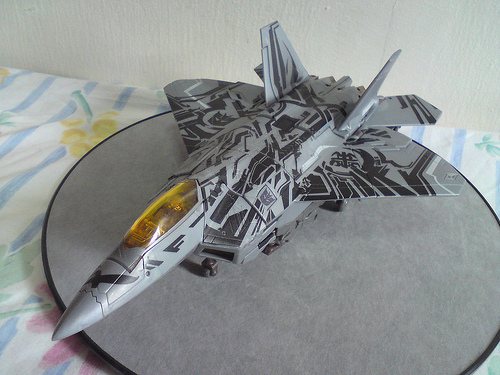 Before I say anything else, I'd like to say that, yes, this is another gift from my ever-supportive better half.

Pics are a bit high-keyed, eh?

Taking it out of the box, you'll be able to confirm up close that the robot mode's got tons of details! Maybe if I were to custom-paint this huge action figure, it'd take me at least a week to detail all the hydraulics, wires, panel lines and whatnots. Click on the pics below to view larger versions. I straightened out the legs since I didn't quite like the chicken-leg orientation based on the movie.

The alt-mode, a Lockheed Martin/Boeing F-22 Raptor, looks awesome, especially if viewed from above. The build is great, almost all the panels are flush and tight, and there are no rattles due to something loose. I can almost bet most people will forget both Voyager class molds even existed after getting ahold of this one. Though mostly gunmetal gray in color, Starscream also features some khaki on his limbs. His Cybertronian tatoo work also appears on the chest and thighs. Any issues that the Voyager molds had are completely nonexistent with this one. The wings fold up nicely so as to not flop around or create kibble issues. The body is broad yet proportionate. His extremities are still on the thinnish side but look in place. And if finally having a movie accurate Screamer wasn't enough, there's gimmicks abound. For one, lifting down on his cockpit chest will light up his chest and eyes, as well as getting to here one of two phrases:


"No one can defeat Starscream!"

"Decepticons will crush the Autobots!

As an added treat, Tom Kenney provides the voice for both sayings. As well as lighting up and speaking, the mouth moves with the cockpit and the panels on either side of the cockpit will pivot out. We're not done yet. But wait, there's more! You will notice a red tab on each forearm. Pushing those tabs up and inward will expose a hidden cache of weapons. The left arm features a pair of molded missiles, while the right arm features a gatling gun. Looks, versatility and tons of weapons. That's what a Leader class is about. I must admit that Hasbro really outdid themselves on this figure. The jet mode is simply stunning. All the ornate tattoo work is present throughout, with a Decepticon insignia flanking the right wing. The cockpit window is done in translucent yellow and features a pilot's seat. You'll also spot the air intakes which are done in translucent yellow. 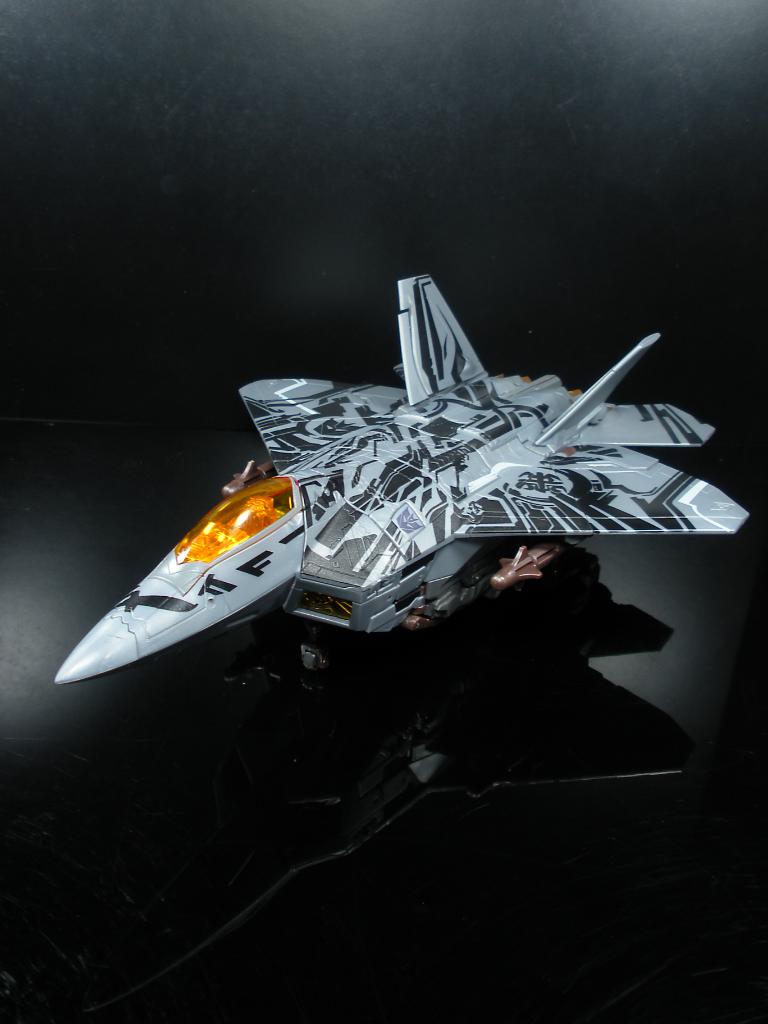 Obviously, he retains the F-22 alt mode seen in the films, with the tattoos he got in the prequel comics:

He's definitely got more mass than the Masterpiece Starscream, even though side by side MP Screamer is about 1/2" longer (mostly due to the nosecone):

The underside does have some robot bits, but at least this time they did what they could to minimize the impact. It follows the basic lines of the underside of a plane, unlike on Leader Jetfire. The missiles tab in under the wings, no place else I've found to store them in plane mode:

Transformation is fairly involved, but not nearly as frustrating of a first time learning curve as Leader Prime. The legs fold out from the bottom, the arms fold out from the back of the jet and the whole assembly folds in half to form the torso, then the arms and back panels swing up and lock into place, and you have a pretty damn decent looking Starscream!

I've heard complaints about the paint apps, especially on the face, but you certainly can't argue much with the sculpt itself!

Gimmicks in robot mode include his mouth opening when you pull on this canopy (see the vid review, I couldn't get a decent picture one-handed), and his forearms each contain a pop-out weapon. Right arm has a gatling gun and the left has a pair of missiles. Also, his head can turn about 45 degrees to either side and the gimmick still functions.

Poseability is pretty decent, lots of pins, hinges and swivels, and the fingers and "thumbs" move independently. No wrist swivel, but considering how the arms are out together with the pop out weapons, it would have been hard to to do without seriously causing some fragility issues in the forearms.

Either hand can fold up and use the missile launcher weapon:

It can store on his back in robot mode, along with the missiles:

Firing at the visual recording device:

and a quick turnaround with the voyager version:

As you can see, he's a lot better than the voyager version. Not to knock the smaller one, but the leader version just seems *right,* in a way the voyager version doesn't. He's not perfect (back boosters?), but he's pretty darn close. At least for now, he's the definitive version of the movie Starscream design. Highly recommend nabbing him when he comes out.

Video review is up here: