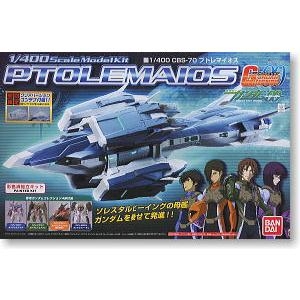 - To 1/400 battleship large series that follows white base, to Namsai,
Gundam Collection largest battleship first appearance!
- Reproduce the ship arrival and departure scene of Celestial Being mother ship in a variety of gimmick of each part!
- The original version of the four aircraft Gundam that appeared in the Mobile Suit Gundam 00] (Gundam Exia,
Gundam Dynames, Gundam Kyrios (flight form), Gundam Virtue) is attached.
Flight form of Gundam Kyrios is the first three-dimensional in the Gundam Collection in particular!
- Hatch opening and closing of the container. Can be stored in the machine four leading role Gundam to each container.
Descent gimmick to catapult even further reproduction.
- It is equipped with the rotation of the container gimmick characteristic.
- It is equipped with opening and closing gimmick of ship neck. The replacement of the supplied figures, I reproduce an outgoing ship scene.
- Can also remove the container.
- Full length: Approximately 650mm