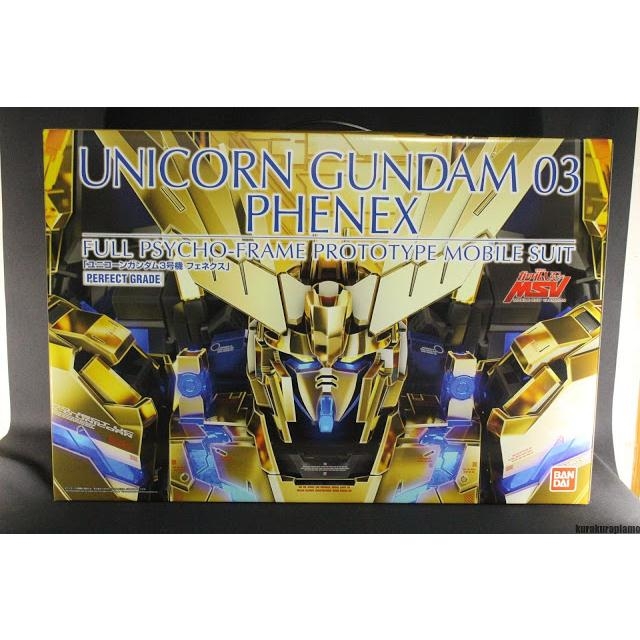 With gold coating applied on the exterior,

●● A contrast of gold and blue-clear！

Shiny gold coating is appied on the exterior of the large 1/60 scale model kit, and the impressive blue Psycho Frame is reproduced with a blue-clear molding from light condensing material.

The contrast between gold and blue is perfectly finished with a sense of impact.

With a style that differs from other Unicorn Gundams, when the LED unit (sold separately) is installed, a mysterious illuminative mood is created.

Equipped with two Armed Armor DE shields. Based on the new connecting frame of the expansion/contraction gimmick for Armed Armor DE,

it shows the flexible mobility when the NT-D is activated, which presents the characteristic of RX-0.

Besides attaching to the backpack, it can also be attached to the arms, which recreates the firing scene of the Mega Cannon.

The unique Blade Antenna is reproduced with new molding, giving an impression of the golden “Phenex”.

Besides the Hyper Bazooka and Beam Magnum which carry various gimmicks, the standard Beam Saber weapon is also included.

It also allows to reproduce the Beam Tonfa on the front arm.

A full color package based on the image of the golden exterior and the blue color of the Psycho Frame. Includes a special instruction manual.

NT-D activated! Enjoy the luminous effect of the Psycho Frame by installing the LED unit!