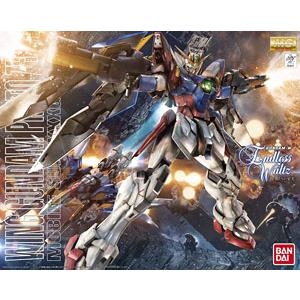 Thương hiệu: | Tình trạng: Còn hàng
1.180.000₫ 1.250.000₫
- The MG ZERO of the EW from the new chapter rush - The new aircraft Wing Gundam Zero prototype of the topic that have been published on [August issue of Monthly Gundam...

- The MG ZERO of the EW from the new chapter rush
- The new aircraft Wing Gundam Zero prototype of the topic that have been published on [August issue of Monthly Gundam Ace]
Appeared to become the MG as early! It is equipped with a deformation mechanism in complete new mold. Moveable frame using the new material
Paint is also available.
- Machine Cannon of the shoulder also hatch closure. Quadruple Vulcan reproduce fine detail.
- It is equipped with a gimmick and various other moveable or linked to the opening and closing wing characteristic. Side armor of lumbar
Fin is movable.
- It is equipped with a beam saber storage gimmick to shoulder.
- Shoulder armor is opened and closed by a double structure. Vernier inside also faithfully reproduced.
- Knee armor is equipped with a movable interlocking mechanism.
- Twin Buster rifle, reproduced in an overwhelming sense of scale. Can also be divided into left and right.
- Shield a nose portion Neobado form at the time. The mechanism, such as deployment of canard wing stretching or gimmick
Equipped. The chest of central [Zero System part Similarly, by using the clear parts, also texture
Reproduction.
- Full deformation to form Neobado
- Lower body and head is rotated 180 °, reproduce the full deformed by each part gimmick. Leg and knee in Armor
It is equipped with a movable interlocking mechanism. I have a folding mechanism and a wide range of movement.
- Dedicated pedestal is attached. The aerial display MS form, in both form Neobado Dedicated joint
Possible.
- The original marking supplied by Mr. Hajime Katoki!
- XXXG-OOWO Wing Gundam Zero proto EW ... Kadokawa Shoten published in the Monthly Gundam Ace]
Appeared in the glory of Gundam W Endless Walts losers] in the popular series.
Aircraft that became the basis of Gundam five aircraft that are submitted to the Operation Meteor. In outer space
I comprises a deformation mechanism for Neobado form capable of high-speed cruising.