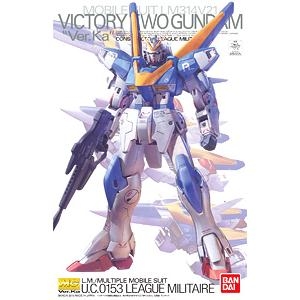 - The height of the difficulty of the function realizing it was one of the factors that hinder the commercialization. In the 1/60 kit issued to broadcast at that time, the shape becomes the sacrifice in that you have to reproduce the head storage mechanism to the core fighter, it has become the impression of sagging breasts. Elimination of this part was one of the proposition. The coalescence mechanism, and technology developed through the armor extension gimmick designed in such as MG V Gundam Ver.Ka has been utilized. Regarding Speaking of V2 high demand [Assault] [Buster] equipment, is now planned also technology validation toward commercialization in the center of the mounting mechanism of additional equipment. After these processes, it became a carry that finally can be released on 35th anniversary of Gundam.

- It comes with parts to reproduce the grenade launcher by mounted on the beam rifle. Hand-gun also possible restructuring in the parts retrofit.
- Head precision fire for the device with the included.
- V2 Core Fighter 2 aircraft accessories. V2 top fighter and V2 at the same time display allows the bottom fighter.