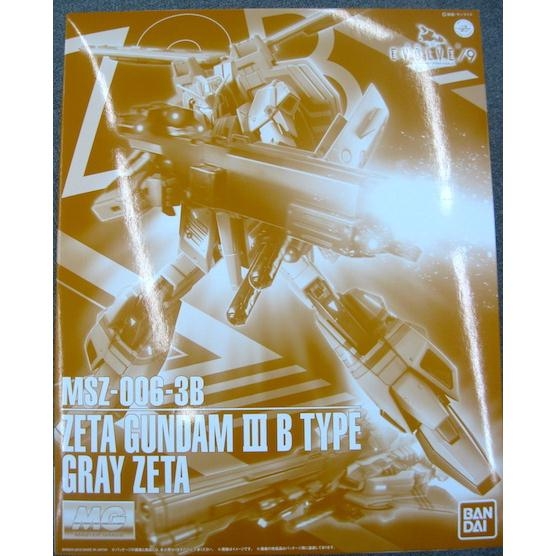 ----------
MSZ-006-3B Z Gundam Unit 3 B type gray Zeta
----------
"Firepower is enhanced zeta Gundam of improvement machine"
Based on the Z Gundam Unit 3, aircraft subjected to the improvement of thermal emphasis. Along with the increase in weight by armed, add or auxiliary thrusters to both legs,
In large tail stabilizer, etc. to be deployed to the left and right, are improvements have been made in exercise performance. It is the aircraft that Gray Wolf was boarding,
Although commonly called "gray Zeta", the anti-beam coating applied to the entire body, the body color has become yellow.
----------

Than OVA "GUNDAM EVOLVE ../ 9", the MSZ-006-3B Zeta Gundam Unit 3 B type gray Zeta, and the first of three-dimensional Gundam!
To reproduce a dedicated weapon Oyo body shape in the new shape, also corresponding to the deformation gimmick to wave rider! !

Weapon of large suitable for aircraft which was to strengthen the beam cannon ... firepower. Overall length is 210mm.

Shield-integrated armed with a built-in mega-Gatling ... beam machine gun. Used by being mounted to the left arm.

● deformation to wave rider!
Can be modified to atmospheric entry mode Wave Rider is a feature of the Zeta Gundam.
Large beam cannon, due to tail stabilizer of the new shape, wave riders and impression of usually are significantly different.

● Stand accessory which is the image of a catapult. Corresponding to the display of both forms.