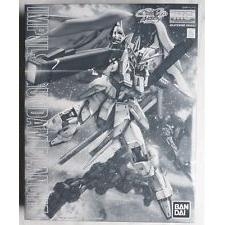 the Impulse Gundam Blanche driven by Elsa Weiss is made into a product for the Master Grade Series!

In contrast to “Gundam Astray Noir” ridden by Dante, replicate the white base characteristic mobile suit color with colored molding.

● Comes with a new design of water slide decals!

Comes with a new design of water slide decals that include the caution marks, along with the

Replicate the large backpack “Destiny R Silhouette” that is equipped to the back.

・ Possible for the “Wolfsbane Long Range Beam Turret” to be opened up across the back from the backpack, replicated into attack pose, and removed and placed into both hands.

・ Possible for single items to be displayed due to a structure that permits independent movement. (supported by "Action Base1” (sold separately))

・ The wing portion utilizes an expandable structure, and it is possible to display an even larger impressionable form.

●“Destiny R Silhouette” can be joined to the Master Grade Series MS that equips to the Striker Pack!