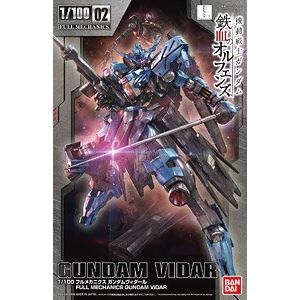 - REALIZE DETAIL: 1/100 High Detail drawn to scale
MS designer in charge of the official set to draw down the detail. Not be drawn in the anime, three-dimensional subjected to mechanical realism detail closer to the real machine.

- MOVIE ACTION: 1/100 gimmick that can be realized because the scale
Achieve a movable body that can be easily reproduced in the play scene. Further equipped with the mechanical gimmick with high reproducibility degree.

- REALISM FRAME: Gundam frame reproduction
Reproduce the Gundam frame down to the smallest detail. Gundam frame of mechanical brave figure is show up at 1/100!

- Reproduced in detail with a density of the new aircraft from the face portion limb, up to the armed.
- Exterior removable. Reproduce the setting as a new frame of Gundam Vie Dahl (provisional) in the interior. Support the foundation of a movable.
- Reproduce the various armed with a variety of gimmick. Six of the blade is possible Sashikaeru. Implement the rail slide gimmick, enjoy a mechanical mechanism. Furthermore Posing that he set the action and armed of the sword also, by the breadth of the movable range, looking determined well.
- Blade Besides that came six, it comes with a handgun 2-chome.