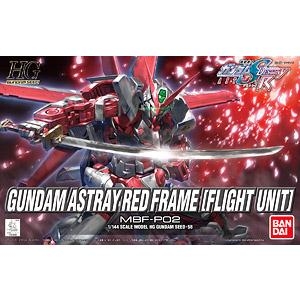 - Red frame of the second bullet flight unit equipped with new format HG Astray series
- Currently, the popular serialized in model 2 magazine [Mobile Suit Gundam SEED DESTINY ASTOAY]
From the series, and HG of the red frame. The new format of the same blue frame on sale in May
Adoption. I reproduce in removable flight unit of fan expectation. The Naginata or Gerbera Straight further
A variety of optional parts such as Baku~u head that appeared in the anime version is attached.
- MS for Naginata Gerbera Straight supplied with packable sheath. In addition, I was combined with this Naginata
Posing Charm big red frame.
- A beam rifle and shield in the joint as the original mechanism, mounted on the flight unit
Mountable.
- Flight unit because it is removable, Red frame of normal state is also reproducible.
- In addition to Baku~u head and Gerbera Straight, and colorful such as a beam rifle and shield
Option is attached.
- MBF-P02 Gundam Astray Red Frame in the flight equipment unit] ... Heliopolis
Unit 2 of Astray was developed in absolute secrecy. Flight unit is an improvement on M1 Astray for.